The Walker’s Rest Stop: A place for tips, tales, and inspiration – Walk with a Doc
Skip to content

Crystal Lorimor walks!  She’s fancied herself a hiker for years but really began concentrating on walking consistently in 2012.  Since that time she’s hiked the Grand Canyon, completed a one-day 50k hike (that’s 31 miles), and completed 5k and half-marathon walking races, both road and trail.  Not particularly fast (by her own admission) and with friends who can rack up more miles than she, Crystal still loves the mental and physical health benefits of walking.  She loves hills, long-distances, and encouraging others to start walking no matter the distance (to your mailbox and back counts!).  She has initiated walking programs in her town and where she works.  A higher education professional by day and walking promoter the rest of the time, Crystal lives in the foothills of Appalachia in Eastern Ohio.

Want to speak with Crystal in the flesh? Well she’s in Belmont, OH, but you can communicate with her through email here!: cllorimor@gmail.com

All Because of a Walk 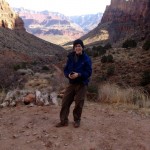 All Because of a Walk